Two press articles recently report on a two year pilot study which suggests that allotments could be as productive as conventional farms. Volunteer urban growers in Brighton and Hove were able to harvest 1kg of insect-pollinated fruit and vegetables per sq metre in a season! (wishful thinking on my allotment…. – ed)

Read the full article from the Guardian here

The Times reports that the average allotment owner harvested 74kg over a season, which would have been sold for about £380 in the shops. The most productive gathered in food worth more £2,000, with raspberries and gooseberries among the most expensive crops… Link for subscribers only

The Guradian report says ” The project, which analysed the yields of 34 “citizen scientists” growing fruit and vegetables on their allotments, gardens and balconies, found that despite limited pesticide use they were each able to grow an average of £550 worth of produce between March and October.

Of the total figure, £380 of it was from insect-pollinated produce – such as squash, courgettes, blackberries, tomatoes, apples and beans – weighing an average of 70kg.

Berries were the most attractive crop to pollinators, the study found.

Across the two-year period, volunteers recorded more than 2,000 pollinating insects among their crops. The most common were bees, which accounted for 43% of all flower visits.

AND – the growers used less pesticides than conventional farming techniques – they were used in under 10% of pest cases – and that the most common pests were slugs, snails and aphids. The worst-affected produce was soft fruit and beans.

“The UK imports approximately £8bn of fruit and vegetables each year, but our results show that green spaces in cities, such as allotments and community gardens, could play an important role in meeting that demand at a local scale.” 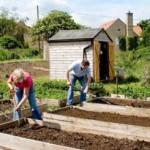 It’s official: allotments are good for you – and for your mental health. The Scientists have been at work again – but at least they confirm what most of us already know…..“Tending your own patch boosts wellbeing and connects you with others”.

A study by academics at the University of Sheffield, published last November, outlines the wellbeing benefits of allotment gardening. The 163 volunteers recorded “high levels of social and community activities, including the sharing of surplus food produce, knowledge exchange, awareness and interaction with wildlife, emotional connection to their allotment, appreciation of time spent outside and aesthetic delight in the natural world”. 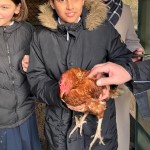 One Monday afternoon in December, when a small group of Granard school children were visiting the Site 2 allotments, Barry was kind enough to introduce them to his chickens. As you can see they were able to hold them and Barry gave the school a dozen fresh eggs which were cooked the following morning. After they had visited the chickens Barry gave a few of the children a ride in a wheelbarrow, ably helped by one of their teachers, Natalya, who is also a plot holder.

Growing and cultivating never go out of style…..

Throughout 2022 we will be looking at ways to celebrate our centenary. Our allotments were part of the original design for the Doverhouse Estate. You will note that there were 3 areas marked as allotments in the plan. Unfortunately the northernmost and largest site, to the north of Huntingfield Road, was later used for development.

Just before Christmas we heard of the sudden death of one of our long standing members. Tom Murphy was a well loved character and a friend to many neighbours on site 3. He had been an allotmenteer for over 35 years and would always share advice on growing things. He still used very traditional methods to grow his produce – usually potatoes (double dug and deep trenched) and wonderful cabbages. He cut the grass on the common paths on both allotment sites for many years, fetching petrol for the mower on the bus and walking the mower between sites!

We will miss him.

We will all remember Tom with some affection. Tom always had a ready smile and a mischievous twinkle in his eye. Even gardening, he was always smartly suited and booted. Several people who were Tom’s immediate neighbours on the allotment, all have their own versions of the following story:

One hot summers day in 2014 – Tom appeared on his allotment dressed as was usual, in a suit, collar and tie.   From his shed he produced a coat hanger, then proceed to hang his jacket on that.  As the sun was glaring down on him in his shirtsleeves, he started a rummage within his shed, finally he produced a sun-hat.  The Australians have a wide brimmed bush hat, complete with dangling corks all along the brim – to ward off the flies.  Tom had his own, the Murphy version!  Emblazoned on the crown it said GUINNESS,  on the brim, numerous small plastic Guinness bottles dangled – to ward off flies.  To cap it all, in a fine tenor voice whilst hoeing – he serenaded everyone with the following :- “Old Man River”, “Mississippi Queen” . Capping it off with Johnny Cash’s “I walk the Line” “Folsom Prison Blues” and finally “Ring of Fire”

The gardening-for-health charity Thrive is looking for local volunteers.

Thrive’s London hub is based in Battersea Park and throughout the pandemic has continued to help locals – either virtually or in-person, when restrictions have allowed – use gardening for health and well-being. Their plants are often found on sale in their outdoor garden centre.

They are looking for Garden Support Volunteers to “assist the client gardeners and horticultural therapists”. You will need to commit to one day a week, from 9.45am-3.15pm, for at least six months. Volunteers need to be patient and understanding, whilst respecting professional boundaries, and be prepared to work outdoors in all weathers.

If you could consider taking on this worthwhile opportunity, read more here

The RHS have launched a Sustainability Policy to help gardeners make a contribution to tackling our climate crisis.

What we all do on a small scale can make a difference. The RHS say….

We all have a responsibility to help mitigate the climate and biodiversity crisis. As gardeners, we’re perfectly placed to support our environment through sustainable growing. Many of us are already planet-friendly gardeners, but there’s always more we can do or help to spread the word across our communities.
To coincide with our new Sustainability Strategy, we’ve put together ten easy tasks that all gardeners can complete to support their local environment. From watering the way nature intended, to making your own compost or growing your own flowers for bouquets – each and every one of us can make a difference in the climate crisis.

Many of these suggestions are already in evidence on our allotments, but here’s one you may be interested in and could encourage others to do…

Here’s an inspiring set of ideas for Front Gardens….Read Now

And here are all the 10 suggestions ….Read Now

After last year’s online style AGM we are delighted to be meeting in person this year.

Committee Nominations for 2021/22 are here. There is still time to join the committee – please email rgs.sw15@gmail.com or telephone Helen at the number on the Nominations document.

Full agenda and reports for members from the committee are listed below. Please read them and bring your questions and comments to the AGM.

Freedom of information requests to more than 300 local councils have shown that allotment waiting lists are at a high point. Lockdown seems to have sharpened interest in allotmenteering, but with Camden heading the waiting times at about 17 years, it may be quite a stretch before people can start growing things. The record waiting time was recorded in Camden at 18 years and 3 months (6,690 days)!

Terry Dickinson, London representative for the National Allotment Society, said that, given the huge benefits of cultivating an allotment, including to mental health, it was vital that more space be made available for new plots in the capital. Richmond and Wandsworth councils confirmed that there had been a large rise in applications for an allotment since lockdown began.

At least 40 allotments have been closed in London in the last 8 months.

The waiting time in Richmond and Wandsworth is currently about 11 years. We allotmenteers are a fortunate bunch….

Taken from a press article submitted by Maria Penchard 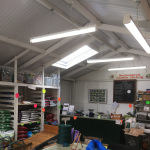 📚 The store is well stocked with a lovely selection of Kings seeds – all with a 10% discount.

🔮 It’s never too early to think about Christmas gifts for a gardener in your life – perhaps gloves, small hand tools and a pretty packet of seeds? Or plant labels, kneeler and a new watering can? The store has it all!

Please Note: The store will be closed after Sunday 5th December.

All our stock is very competitively priced – check the price list here.

Looking ahead to January 2022 make sure you have your seeds of tomato, pepper, celeriac, celery and aubergines ready to start off on the kitchen windowsill! We have several varieties of tomato seed in stock including some blight resistant ones (Crokini, Mountain Magic and the Organic Koralik). Some people swear by starting their sweet peas in January too.

The latest project from Putney Community Gardeners is a year long plan to establish a forest garden on a new site located at the corner of Carslake road and Hayward road. A consultation event is planned for those living locally, near the site, as the design will influence their local environment, access, lighting, play spaces etc. If you consider yourself to be local, or are interested in longer term care for the site, then pencil in November 28th (note change of date!) in your diary and look out for more details soon!

We are currently looking to put together a core team who are able to dedicate about 2-4 hours per week to see this project to fruition. If you’re interested in finding out more, we will be having a zoom call from 6-7:30pm on Tuesday the 19th of Feb where you can find out more about the project and decide if you’d like to join the core team. If you’re interested in attending this call please email info@putneycommunitygardens.org and we’ll send you a link.

Putney Community Gardeners have so many interesting growing spaces now – you might like to check them out on this interactive map: here

Become an expert on growing all types of currant bushes, at a full day workshop at Carshalton Community Allotments in the New Year. They say:

Currants (including blackcurrants, gooseberries, redcurrants and jostaberries) may be small, but they pack a real nutrition punch. Growing currants gives excellent yields of fruit over many years. Bushes can grow large, but most currants can be trained to grow in smaller spaces and fit into a tiny garden.

The ‘hands on’ workshop is led by Sarah Foss, RHS qualified fruit grower and tutor.

–       Learn about types of currants, planting, training and pruning

–       Practical experience in winter pruning a variety of currant bushes

Check these website links for details of courses and events throughout the year.