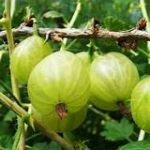 The north of England is host to a number of Gooseberry Societies where the annual contest for the ‘heaviest’ gooseberry is hotly contested. Bryan Nellist of the Egton Bridge Gooseberry Society won their competition this year by a fraction of a gram at 26 drams 18 grains. The variety grown was ‘Belmarsh’, a white gooseberry.

The current world record was set in 2019 by Graeme Watson of the same society at 36drams 12.5 grains for a yellow gooseberry – variety ‘Millennium’ .

Egton Bridge (near Whitby) was delighted that the show could go ahead this year after last year’s Covid cancellation was the first in a 220 year history. The Gooseberry Society competition still strictly abides by the hand written rules from 1823.

Sadly, on the other side of the Pennines, Terry Price of the Goostrey Gooseberry Society in Cheshire, found that his prize bushes had been poisoned ahead of the competitions. He suspects by a rival grower!

Check these website links for details of courses and events throughout the year.